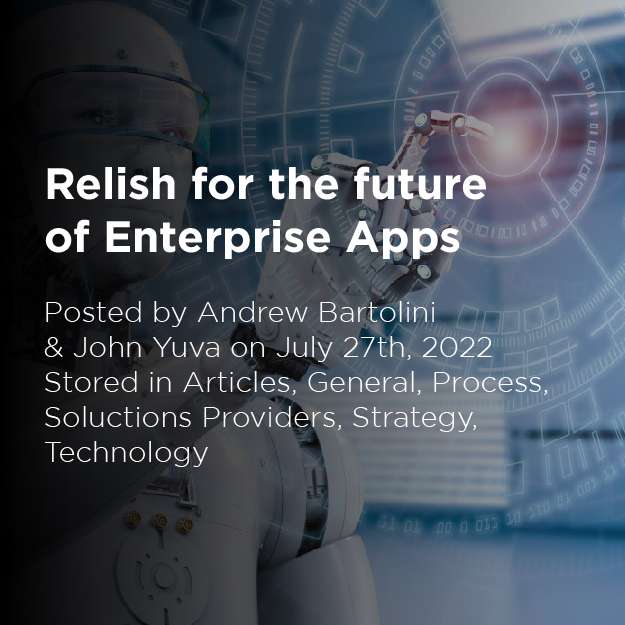 Recently, the Ardent Partners team had an opportunity to connect with long-time procurement executive Ryan Walicki, Founder and CEO of Relish, a business-to-business app provider that is focused on designing enterprise applications that help maximize investment, to discuss the overall market and provide an update on his company.

The discussion began with Relish’s origin story. The company’s roots are in consulting, springing out of Nitor Partners (now Nitor), a source-to-pay spend transformation firm, that was founded in 2003 (Walicki joined in 2007). Over the past twenty years, Nitor grew and expanded beyond traditional systems integration work and now offers advisory, consulting, and sustainability services.

In his time at Nitor, Walicki recognized a couple of critical business challenges that the firm continued to face. He says the company was performing a significant amount of customization work that was frequently outside the scope of the initial engagement. And, while the customizations served a near-term purpose, ongoing support and future upgrades could be significant challenges.

“We asked ourselves what are all the things that Nitor is doing today that could potentially be product-centered and help our clients maximize their IT investment? That question is how Relish was born nearly six years ago,” says Walicki. “Immediately, a development team started working nights and weekends exploring Ariba, Coupa, and Ivalua deployments and identifying common spaces and gaps with our own clients. This first step was the impetus for Relish’s initial market solutions and value proposition.”

As R&D continued for Relish, Walicki says the company took a unique approach of meeting with its traditional solution provider partners (e.g., SAP, Ivalua, Coupa, and others). Relish shared how partners could serve as a sales and service hub for Relish (similar to how Salesforce initially began on the Force.com platform), while the company delivered third-party apps for the “final mile” of solutions to their end customers.

“The premise for Relish was born from consulting. We build lightweight apps that are intended to extend the investments you’ve already made; not replace Ariba or Coupa or Ivalua, but rather to work alongside those solutions — in concert and in parallel symbiotically — to solve some of the whitespaces and gaps that lack focus and attention,” explains Walicki.

Walicki says Relish has developed a global delivery model that’s very channel focused with the ultimate goal of becoming an OEM provider, building apps on behalf of its partners that then sell those solutions directly to its existing customers. In terms of channel partnerships and its go-to-market strategy, Relish can capitalize on the 20-year relationship that Nitor has with many providers in the marketplace.

Two of the Relish applications that Walicki says are of particular interest because of the current business climate are Relish Data Assure and Invoice AI.

“To validate the information, Relish relies strictly on primary sources, such as the Internal Revenue Service, United States Postal Service, and GIACT for reliable supplier data and banking information,” says Walicki. “And the application is highly configurable and functions in the background.”

“Customers put significant time into the delegation of authority and exceptions as well as how invoices are routed and how suppliers get paid,” he says. “To leverage that investment, we want as much volume going into that pipe.”

Under the hood, Invoice AI takes advantage of OCR technology. While most documents are not OCR readable, Relish has strong OCR capabilities that don’t require a template and can decipher a contractor invoice on the back of a napkin, says Walicki. Working alongside OCR is artificial intelligence that enables digitized invoices by teaching the application where different fields are located for specific customer invoices. For example, the PO fields for FedEx may appear in the top right corner of the invoice — the AI learns this and distinguishes FedEx invoices from other customers.

“Currently, we’re hitting an 80% success rate out of the gate with clients,” Walicki says. “Within two months, it’s over 90% in terms of touchless invoices that were either previously mapped through our work or mapped by the client.”

While OCR and artificial intelligence are critical to Invoice AI, Walicki says the glue holding the application together and differentiating it from other market offerings is machine learning. Specifically, how the application uses master data and transactional data.

“Through this application, we’re bringing in PO data, receipt data, invoice data, and supplier data, so that when ‘PO1234’ appears, we can validate that it exists and that specific line items on the invoice match those on the PO,” explains Walicki. “It’s about removing as much of the human element as possible with computerization until only exceptions required at the client site remain.”

What is the company’s five-year plan? Walicki says it’s a multipronged approach in which Relish works through its channels building apps that are available to customers in partner marketplaces and/or works to become a “certified” partner.

“A great example is our partnership with Coupa,” says Walicki. “In August of 2021, Relish became one of Coupa’s first partners to appear on its website after a major program relaunch. We have a joint product meeting every two weeks to ensure that what we’re building doesn’t coincide with one of Coupa’s roadmap items.”

“Another part of our five-year plan is that we want to get beyond spend management and into supply chain, which is obviously core to what we’re doing, but also finance, treasury, and other cost center areas that are run by enterprise software,” he adds.

As the enterprise solution market has evolved over the last few years, large providers have increasingly focused on developing (and messaging) a technology platform that can serve as hubs of innovation for third-party technology partners to offer solutions and expertise in a way that assures clean integrations and enables the primary solution provider to maintain its relationship with its customers. Much in the way that a smart phone’s app store provides tremendous value to its users, the enterprise apps market is poised to do the same thing.

Relish continues to innovate and identify gaps in the solutions market that can be filled with an app. Through its extensive partnerships, Relish is well-positioned to continue developing and delivering apps that matter to the users of source-to-settle solutions, and eventually other business process areas.